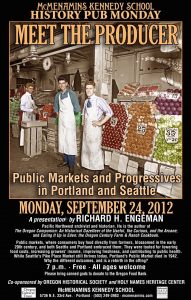 Richard is an experienced and engaging speaker.  His presentations are illustrated with historical photographs, illustrations, advertising, and other images. Some recent presentation topics are listed below. Richard can modify existing programs to emphasize particular places or issues, and can research and produce presentations on other topics in Oregon history.

Richard has appeared in television and film documentaries, speaking on historical topics. Examples include episodes of “Oregon Experience” on Oregon Public Broadcasting, such as “A Cuisine of Our Own” about food writer James Beard, and “Streetcar City,” about Portland’s old—and  new—streetcar systems.

Presentations are suitable for general audiences, and have been presented at public libraries, historical societies, retirement communities, senior centers, and school groups.

On the Dining Car Out West: Eating on the Train

Chop Suey for All: Chinese Cooks in Oregon

Land of the Empire Builders

Some of the organizations for which Richard has done presentations