Menus from small town eateries are usually predictable in their offerings, as much so today as they were seventy-odd years ago. The good eats at the White Restaurant in The Dalles, Oregon, as presented in this menu from about 1940, feature breakfast: eggs, bacon, sausage, hotcakes, some omelettes (plain, cheese, ham, bacon, jelly, or Spanish). The menu also lists a modest assortment of steaks and chops, sandwiches, salads, soups, beverages, five potato preparations and a scattering of vegetables, plus raw, stewed, or fried oysters, and “Chinese noodles”: pork or chicken.

Tipped into the menu when I acquired it was a loose sheet of daily specials, a typed listing on carbon paper. In comparison with the White Restaurant menu, it is quite ambitious. At the top, it says BIG MEADOW CAFÉ, crossed out and replaced with Camel; also, the notation Lovelock, Nevada, 1,263 pop. At the bottom is the suggestion, “’STAR DUST’ AT THE THEATRE.” So what’s that all about? 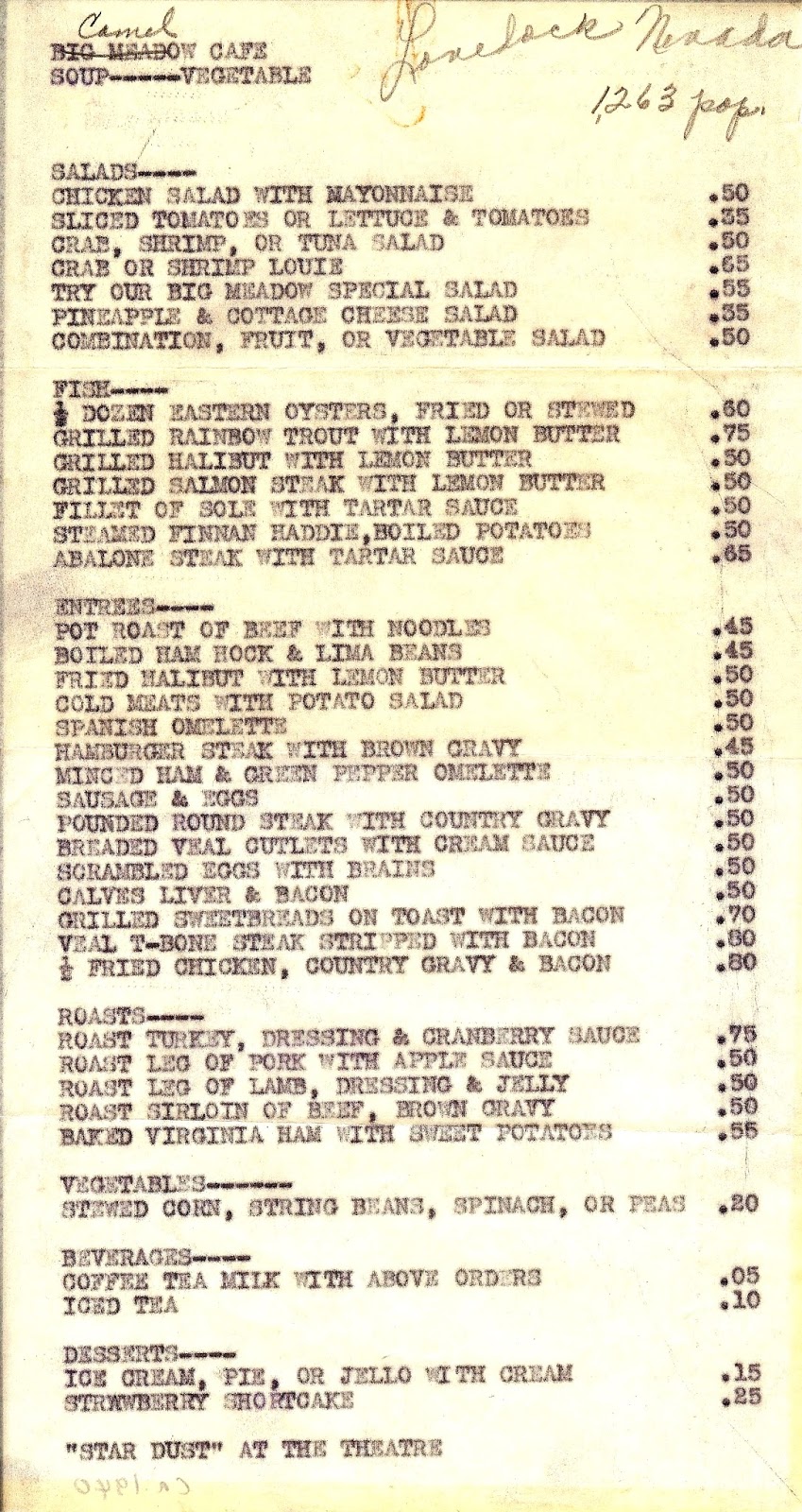 Google made it surprisingly easy to find out—sort of. On January 27, 1940, Andy Milich of Lovelock, Nevada, was killed in an automobile accident. According to the Nevada State Journal, Milich was “the proprietor of a chain of business establishments throughout the state, including the Big Meadow Café, Nevada Bakery and Camel Café in Lovelock, Montana Club in Tonopah, and the commissaries at Silver Peak, Getchell, Copper Canyon, Stardust mine and other mining districts.” And the movie Star Dust, starring the teenaged Linda Darnell, came out in 1940.
But what was that daily special sheet from Lovelock doing tucked into a menu from The Dalles? And why were the offerings from Mr. Milich’s restaurants in a Nevada desert town of 1,263 residents seeminglyso much broader and varied than what was found in The Dalles with its 6,266 residents? Ah, and where will you find an abalone steak with tartar sauce today?