A Short Saga of the Sagamore

A Short Saga of the Sagamore 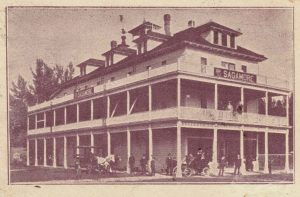 Baker City, population 9,828 in the 2010 census, has never been awfully populous, but it has long been a stopover city for travelers, salesmen, and fortune seekers. There are and have been some noteworthy hotels, such as the Geiser Grand (1889), the Antlers (1900), and the Art Deco Hotel Baker (1929). All three are still standing, although only one is currently a hotel.  The Sagamore Hotel (1897) was a bit more modest, and it has vanished, torn down in 1959; the site has been a parking lot ever since.

Baker City was the thriving trade center of a gold mining region in the early 1900s, and the 44 rooms of the Sagamore Hotel were occupied not only by traveling salesmen, but by long-term residents who boarded there. In 1902, the Sagamore and another Baker City hostelry, the St. Lawrence, were affected by the demands of a labor union, the local Cooks’ and Waiters’ Union. The CWU wanted all Chinese cooks in Baker City ousted and white cooks installed, and it appears that this happened with these two exceptions. The Sagamore was not a union hotel, but the “proprietor of the Sagamore complied, but the cooking was so vile that after two days the guests of the hotel notified the proprietor that he could change cooks or they would leave the hotel. He at once re-employed the Chinese cooks. Mr. Enest, of the St. Lawrence, said he would employ white cooks if [the CWU] would give him a bond to cover loss if they got drunk. This the union refused to do.” (Portland Morning Oregonian, May 23, also 26 and 31, 1902)

The resolution of this impasse I have yet to discover, but some kind of peace must have evolved, for here we have a 1905 Christmas dinner menu from the Sagamore. It’s an ambitious but straightforward offering, one that was likely partaken of by Sagamore guests and residents as well as other Baker City citizens. Who cooked it? I don’t know. 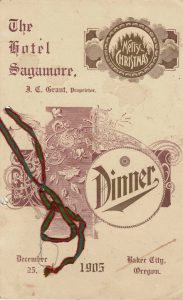 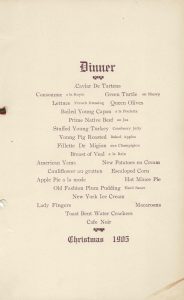