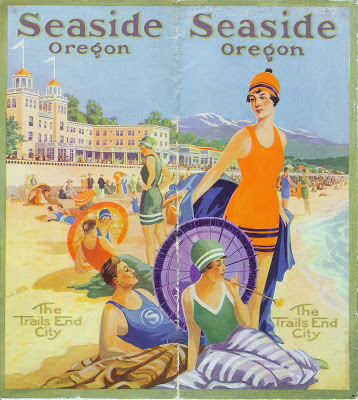 “Cool in Summer. Warm in Winter.” This brochure, issued about 1922, has a distinct California aura about it, with the faintly Cal-Mediterranean hostelry (the Moore Hotel looked somewhat similar to this) and the snow-capped mountain peaks. Orange, purple, green; parasols, bathing caps, blanket-covered knees. It’s a charming picture. It’s just not Seaside, Oregon.

Trails End City? Seaside was then in the throes of proclaiming itself the end of the trail of Lewis and Clark (because they boiled that seawater there to get salt, and they stayed a few nights), and also the end of the “famous Old Oregon Trail,” “reaching from Omaha to where is now Seaside. This migration continued for a period of eleven years, and won the Oregon Territory for the United States.” Boosting for business purposes has trumped history every time.
Seaside in 1922 had assets beyond faux history: it had “The cool, white inviting surf, the broad expanse of smooth clean beach, imposing Tillamook Head …, the turbulent mountain streams and the broad expanse of a mighty river.” The Necanicum River might be viewed as a sort of mild-mannered mountain stream, but that broad and mighty river must be the Columbia, fifteen miles to the north. Seaside offered golf and tennis, surf bathing, aeroplaning, boating, swimming, hiking, fishing, dancing, “plain loafing,” clam digging, and crabbing.

Today, Seaside is a jangling, jarring mishmash of highrise schlock motels, an outlet mall, a convention center, and a cold featureless beach littered with cigarette butts. You can still find some neat beach cottages in the pine trees on a few side streets and along The Prom, the beach walk built in the 1920s. Today there is still salt water taffy for sale, and bumper cars to ride, and a charming riverside golf course that floods every winter (but who’s golfing then, anyway?).

“In the evenings the beach is lighted by innumerable bonfires, built from the salty driftwood, about which are gathered jolly parties, toasting marshmallows and dancing to impromptu music.”