The Rise and Fall of an Oregon Fowl

The Rise and Fall of an Oregon Fowl 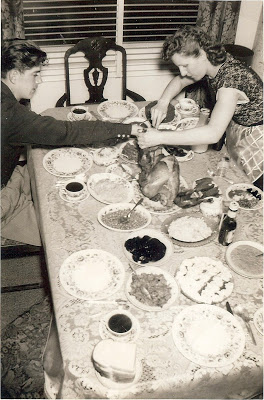 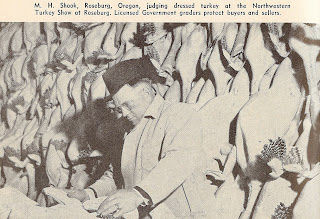 ‘Tis the season of the turkey. For several decades, Oregon was a noted producer of turkeys for the table, and a notable place for the developing of meatier birds. At one point 30% of the West Coast’s turkeys were grown in Oregon, and they were prized for their high quality. Large turkey farms and specialty turkey breeders were found in Yamhill County near Dayton and McMinnville (McMinnville began its Turkey Rama in 1938), in the Hood River Valley, and in Douglas County, where the first Northwest Turkey Show opened in Oakland in 1929. 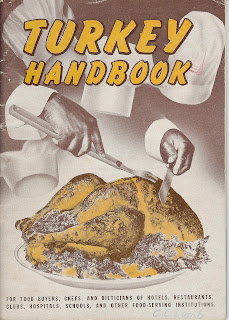 World War II, when beef was rationed, raised the consumption of turkey, and roast turkey was a popular restaurant menu item through the 1950s. This 1947 Turkey Handbook from the National Turkey Federation helped promote the institutional use of turkeys. It included recipes to make good use of all parts of the bird; a 24-pound turkey could yield 20 cooked portions of 6 ounces each.

Restaurant menus from the mid-20th century rarely indicated the sources of their ingredients. The few exceptions were foods such as oysters, which varied in taste and texture according to their growing locale and their type. While local pride only occasionally elicited a descriptive phrase, a roast Oregon tom turkey was often to be found on West Coast restaurant menus of the 1930s through the 1950s. For example, Schapp’s Restaurant in Portland’s theater district boasted “Roast Oregon turkey with cranberry sauce” on its carte of July 3, 1940; otherwise, only the Louisiana shrimp was called out for its geographic origin (well, and the Columbia River salmon and Olympia oysters). This Multnomah Falls Lodge menu from the early 1950s features “Oregon tom turkey with dressing and cranberry sauce” as well as an “Oregon turkey sandwich.”

But turkeys have changed in the past few decades. Turkey raising in Oregon has nearly disappeared. Turkey meat has become something of a protein filler, appearing as turkey pastrami, in turkey chili, as sliced bits in salads and sausages, but the grand Oregon tom roast turkey has disappeared from the family dining table and the restaurant menu — except at Thanksgiving and Christmas.

“RAISING TURKEYS IN SCENIC OREGON. Thanksgiving comes every day in the year in this land of big turkey flocks. These fan tailed birds spread out over a vast acreage, sometimes reaching out as far as the eye can see. This region, with its scenic splendors, is a land of superlatives.”