This train, for a few brief years (1909-1914), sped to the Twin Cities via Cranbrook (British Columbia), Moose Jaw (Saskatchewan), and Portal (North Dakota), mostly over the Canadian Pacific Railway lines and those of its subsidiary, the Minneapolis, St. Paul & Sault Ste. Marie Railway, better known as the Soo Line. 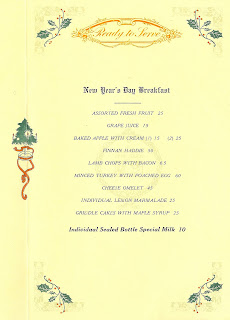 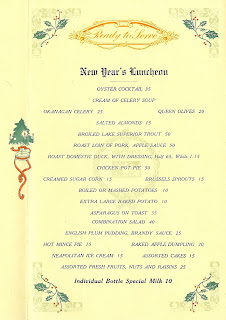 So if I left tonight, then on Thursday, January 1, 1914, New Yea’s Day, I would have been offered these menus in the dining car of the Soo Spokane-Portland. Breakfast (lamb chops with bacon) would have been served while heading up the Snake River, lunch as we were approaching Spokane (chicken pot pie), and dinner north of Bonners Ferry, Idaho (oysters on the half shell, then broiled filet of salmon). Friday we would cross Alberta and Saskatchewan and enter North Dakota; I would be in Minneapolis in time for dinner Saturday evening.

The heady days of the Soo Spokane-Portland came to an end early in 1914, when the train was cancelled due to the European war, a fiscal crisis, and the competition from three American railroads serving the same region. Terry and I toured a few of its once-elegant cars this fall at the Canadian Museum of Rail Travel in Cranbrook. This is a desperate sort of museum, endeavoring to preserve and display dozens of aged, travel-weary railroad cars, and hard pressed to be able to afford to do anything really well. Two cars which were once part of the Soo Spokane-Portland were reclaimed (salvaged?) by the museum, after many decades of use as vacation cabins in the North Woods.

In our present day world of industrialized travel, it was surprising to see conveyances that were framed in steel, but were also crafted in wood and glass. Inlaid marquetry work graced the walls of the sleeping car Omemee (it had a name, not a number, to identify it), and the aisle ends were capped by decorative half-dome ceil with more than 1,200 pieces of stained glass.

The schedules and the menus, the brochures and the photographs, don’t convey all of the salient aspects of train travel in the Pacific Northwest a century ago: they can’t demonstrate the erratic heating, piped back from the engine as steam; the not-always-savory smells of cooking in close quarters in the dining car; the aromas from the washroom, where men smoked and chewed, and the hopper deposited its contents onto the track; the coal smoke; the sounds of creaking wood and straining steel; the snores and whuffles in the sleeping cars, where draperies served as room dividers.