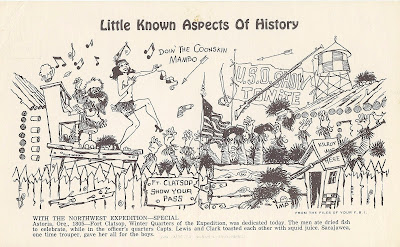 Talk about Oregon oddities: these are odd. What are they? They are three postcards created ca. 1955 by S. Dave Babbett on the occasion of the sesquicentennial of the Lewis and Clark expedition, in particular their over-wintering at Fort Clatsop in 1805-1806. While I have three cards, there may have been more in the series.

The cards include lots of faddish period-specific references: coonskin caps were hot, deriving from the popularity of the Disney television series “Davy Crockett” (my sister had a white one, shoddily made of ratty rabbit fur); USO shows were hot, with the troops in Korea; the Cuban dance and music known as the mambo was hot; comic-strip police hero Dick Tracy and his two-way wrist radio were hot. 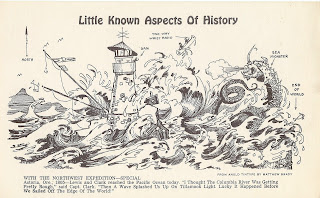 Other references? Not so hot. Sacajawea as a hotsy-totsy. Oy. So, who the heck was S. Dave Babbett, and why did he draw these things? Dave shows up in the Portland Oregonian in 1955, when a book of his photographs was issued by Cascades Press of Corvallis, called Cannon Beach, an Essay in Pictures. According to entertainment columnist B. Mike (July 9, 1955), “Babbitt, the author, came from New York last September where he did TV and commercial art on the east coast. Right now he’s doing free-lance art work and teaching painting at Cannon Beach. He wanted to come to the west coast to do some painting, saw Cannon Beach on the map, visited it, and settled down. Calls it the most beautiful ten-mile stretch of beach he’s ever seen.”

In 1956, Babbitt was reported to be a new staff member of Pacific National Advertising Agency, where he was to supervise television advertising production; he was noted as having previously been a television writer for the prominent New York City ad firm, Ted Bates, Inc. The last mention of Babbitt was on November 4, 1960, when he exhibited an oil painting at the Portland Auto Show, “Be Home Before Dark”; “The oil shows two lovers in the back seat of a car. In the distance is Haystack Rock at Cannon Beach. And it’s not dark, it’s broad daylight.” 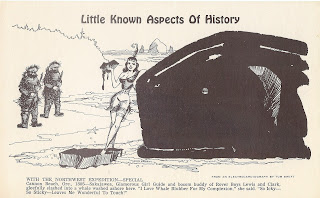 Any additional information on these peculiar cards, or on their creator, the elusive S. Dave, would be much appreciated.