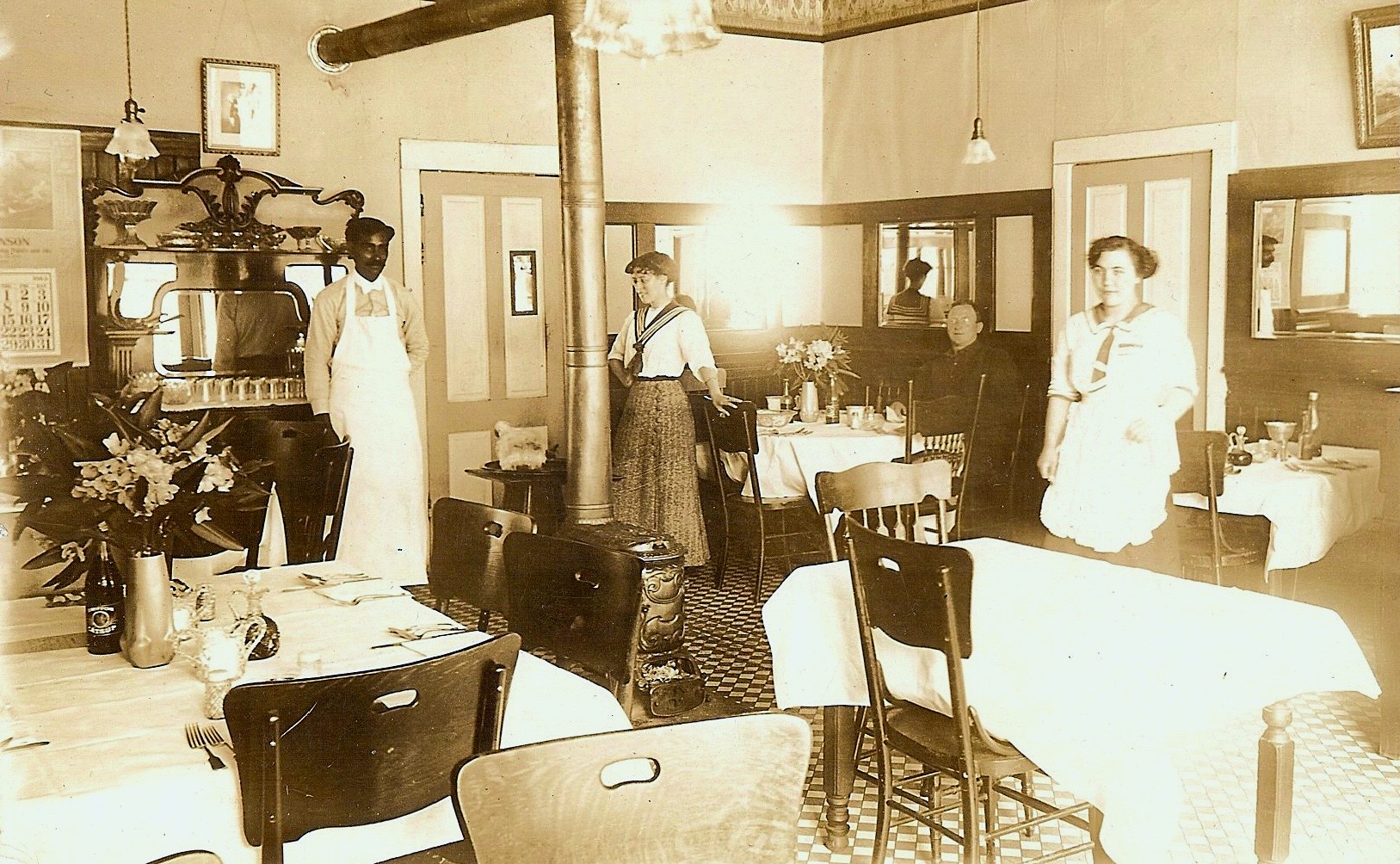 I have learned some more about the photograph of the cozy dining room described in “Springtime Mirrored in Waldport.” Many thanks to Colleen Nickerson of the Waldport Heritage Museum of the Alsi Genealogical and Historical Society for identifying two of the people in the photograph.

My own first search for information about this photo, in the crumbling issues of the R. L. Polk & Company’s Oregon-Washington Gazetteer at the Oregon Historical Society, suggested that this might be the dining room of the Central Hotel at Waldport, as the Central was the only eating place noted in the gazetteer. In the period 1909-1912, “Troxel & Broadley” were listed as the operators of the Central Hotel.

Coupled with information found online via Find a Grave, Historic Oregon Newspapers, and RootsWeb, I postulated that perhaps Thomas Edgar “Ed” Broadley (1865-1935) and his wife Elsie Josephine (Troxel) Broadley (1882-1972) were the man and woman at the left in the photo. This was a particularly enticing speculation, because Elsie was reported to have been a fine cook, according to a family history posting on RootsWeb by Elsie’s granddaughter. “Elsie made the best homemade brown gravy using bits of leftover pie crust that had been browned,” giving the gravy “little crunchy tidbits.” Other foods were also mentioned: creamed peas, sugar cookies with raisins, and gooseberry pie.

But my speculation was in error. The same photograph is in the Waldport Museum collections, and there the fellow on the left is identified as Alvin McCleary, and the woman at the far right as Myrtle Gay Kent. Both Alvin and Myrtle were at times employed at the Alsea Housel in Waldport, known after 1914 as the Wakefield Hotel. Capt. H. J. Wakefield (1847-1916) was a prominent Lincoln County citizen, a county commissioner (Lincoln County was formed in 1893), an emigrant from England, and owner of a hotel in Waldport. In 1899 in Yaquina he married Hannah Rose, who had just arrived from their mutual home town of Skegness, England; the two had know each other for many years. Mrs. Wakefield is listed in the Polk Gazetteer of the early 1900s as the proprietor of the Alsea House in Waldport.

I know rather little of Myrtle Gay (1893-1955). In 1916 she married Andrew Dixon Kent (1884-1953), who was an amateur baseball player, fisherman, Waldport city council member, and mailman. We know somewhat more about the gentleman on the left, Alvin McCleary (d. 1951), who was the adopted son of Louis and Maria Southworth. Louis Southworth (1829-1917) was born into slavery, came to Oregon as a slave in 1853, and purchased his freedom from James Southworth by 1858. In 1873 he married Mary Cooper; the couple took up a homestead in the Alsea Valley in 1879, along with Mary’s young son Alvin McCleary, who had been born in the West Indies.

While the life story of Louis Southworth is well known, that of Alvin McCleary is not. He appears in the pages of the Lincoln County Leader as the proprietor of a Waldport meat market in 1908 and 1914. After the death of Captain Wakefield in 1916, the captain’s widow, his niece, and Alvin McCleary signed a card of thanks in the newspaper. In 1919, Mrs. Wakefield made an extended trip to her home in England, and Mr. McCleary was in charge of the Wakefield Hotel in her absence. His proprietary stance in the photograph of the dining room is thus well earned.

On September 27, 2019, I received information from David Campbell via e-mail that the woman in the center of the photograph, next to the stove pipe, is his grandmother, Violet Rose, who came to Lincoln County from England in 1912 to work for her aunt and uncle, Hannah and John Wakefield. David reports that in 1951, when he was five years old, he and his mother and grandmother met Alvin McCleary in Waldport, shortly before his death.

That Fred F. Sasman took the photograph of the dining room, the exterior view of the Hotel Wakefield, and this charming photo of Myrtle, puts all three images in the period 1911-1914, by comparison with other Sasman photos shown in Oregon Digital. What remains puzzling is that the photograph below of Myrtle (posed at the heretofore unmentioned Baldwin House hotel in Waldport) is identified as Myrtle Kent, May 1911; however, she did not marry Andrew Kent until 1916, by which time Sasman was in dental school in Portland. More threads to unravel!