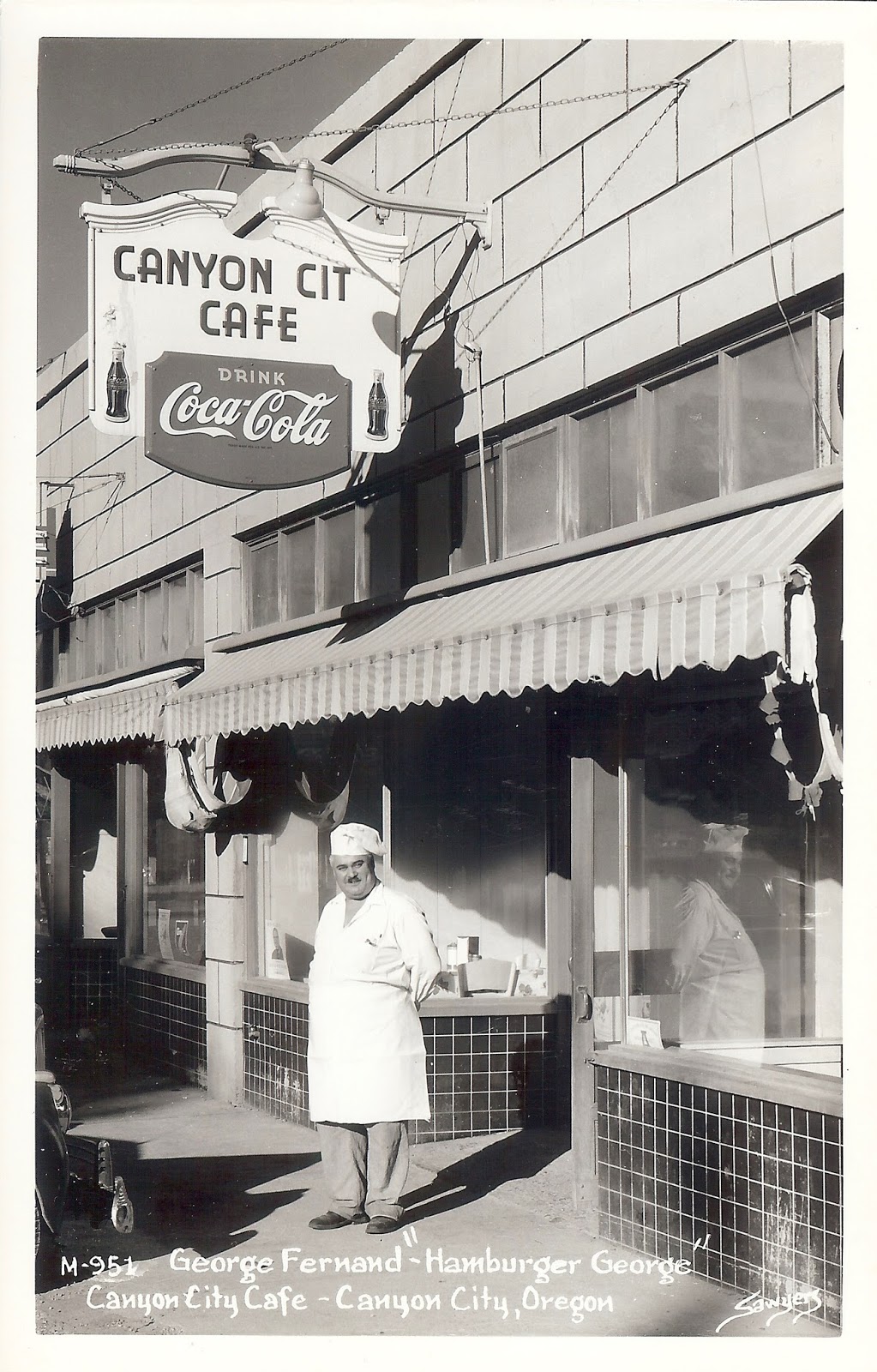 Yes, that’s the proprietor of the Canyon City Café, proprietor and chef Hamburger George (or Big George) Fernand. This photo postcard, issued about 1950, shows a good representative of a restaurant type: the small-town café that filled all culinary needs. In the 1950s, the hamburger sandwich, in a basket with French fries, was one of those needs; especially among the young, its popularity was growing by leaps and bounds, and leading us toward a nation that is now awash in franchised ground beef emporia.
There were other needs, too, though, beyond that of the high school student hamburger aficionado. The small-town café served breakfast, lunch, and dinner; it served residents who were daily regulars for coffee or lunch, occasional travelers staying at the motel on the edge of town, and recurring day visitors such as truck drivers, ranchers in town to shop, and hunters in elk season. It was part of daily life for some, but was a special treat for many others, for “eating out” was also often both entertainment and a relief from the daily drudgery of meal preparation.
Hamburger George Fernand, also known as Big George, was born about 1905 in either California or Hawaii (accounts vary). The 1940 census shows him a resident of Canyon City along with his wife Carmen and daughter Meredith, aged 2. Canyon City had been born of a gold rush in 1862, and in 1940 it had a population of 312; the adjacent town of John Day held another 708 residents. Three hundred miles from Portland, Canyon City was no metropolis, but it was on the highway, and there were jobs in lumber mills and on cattle ranches. There were plenty of customers for the Canyon City Cafe (also called the Canyon Inn).
Eastern Oregon author and agriculturist E. R. Jackman wrote about Hamburger George in an article for the Oregonian’s Northwest Magazine (March 20, 1966), “A Food Lover’s Adventure in Oregon.” George was stern in his dicta about cooking: meat should always be cooked in its own fat, and eggs must always be cooked in butter; during World War II, with butter rationed, George would not take an order for eggs if he didn’t have the butter. Jackman recounts a case of George’s “imperiousness” in the 1940s, when Oregon governor Earl Snell arrived in town with the state treasurer and the secretary of state, expecting to be able to eat dinner at the Canyon Café. It was closed. Quotes Jackman of Snell:
“But George! You can’t do that to us. I’ve been telling these men clear from Prineville [120 miles west] what a treat they had coming.” Big George told them, “I’ve sent the help home, every dish in the house is dirty, and I can’t serve you unless you want to get back there and wash up every dish.”
And wash they did. “Then Big George served them. I think that is democracy at work,” said Jackman.

In small towns around the Northwest, there were cafes run by men and women who wielded a spatula in similar fashion, serving up similar fare, and often of similar local stature. In the 1950s, when our family took one of its rare let’s-eat-out excursions, it was often just down the road to Pop’s Chicken Dinner at Newton’s Corner, where we usually had the burger baskets. Pop Wells manned the deep fryer and the grill, his wife was a waitress; their daughter Diane was one of my school classmates. Pop Wells of Warrenton was a lot skinnier than George Fernand of Canyon City, but each did a mean burger, and each cut a pretty big figure in town.