Podcast: Oysters All Around

Podcast: Oysters All Around

I recently did an interview with urban farmer and food journalist Chris Seigel, “Oysters All Around,” which can be heard on  Underground Airwaves at http://unairpodcast.com/2015/07/06/richard-engeman/. Underground Airwaves describes itself as a site that “collects personal food and farming stories, intimate conversations, and historical ephemera—those intangible things that regenerate a rooted food culture.”

The interview was also aired on KBOO community radio’s Food Show in Portland on July 15. Chris wanted stories, so there are stories about the rise and fall of horsemeat commerce, and about oysters. The oyster stories derive from two items of paper ephemera: a restaurant menu from Eastern Oregon during World War I, and an 1889 advertising trade card from Arbuckle’s coffee. 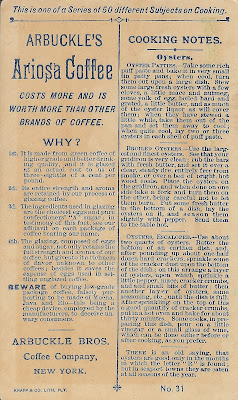