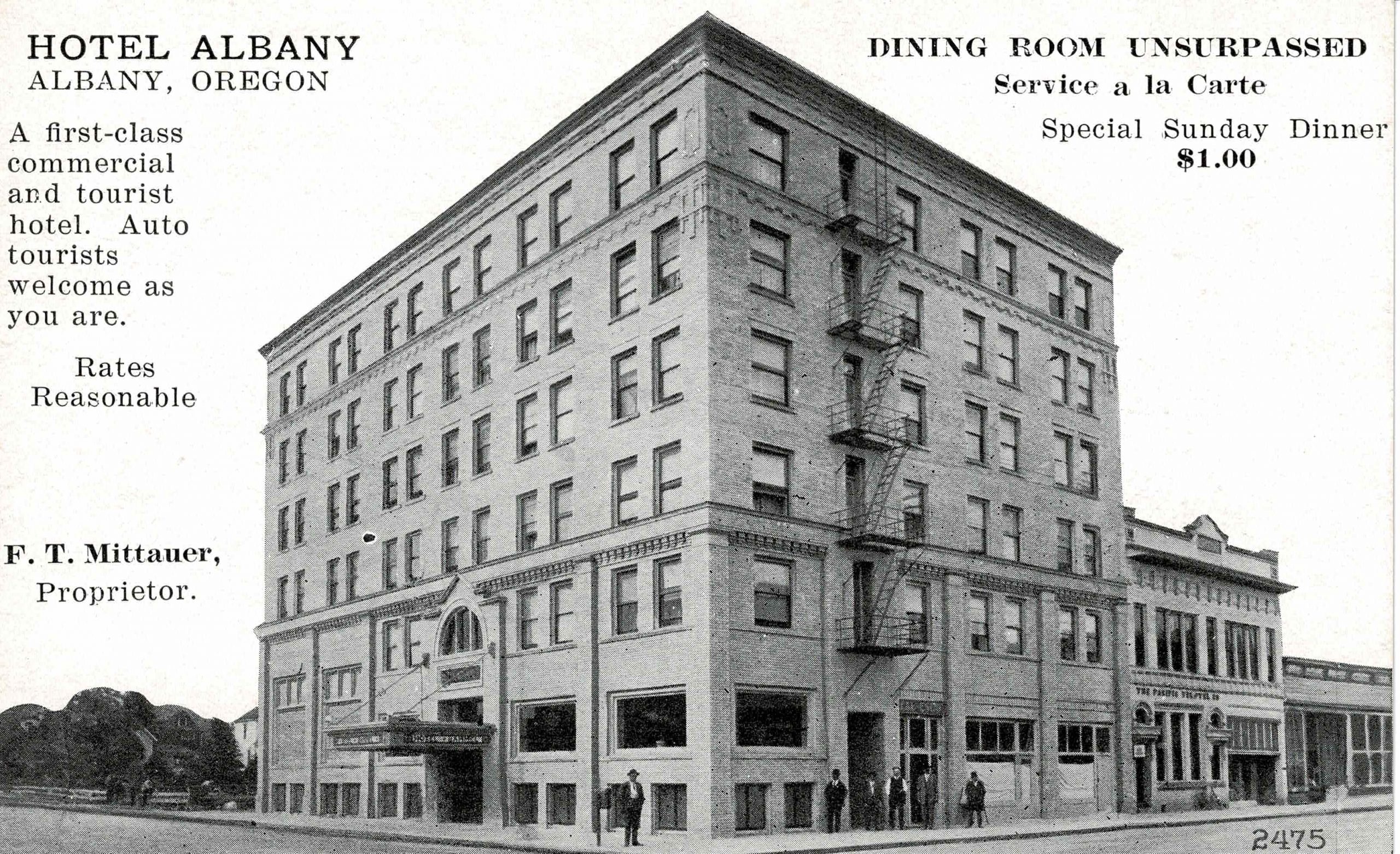 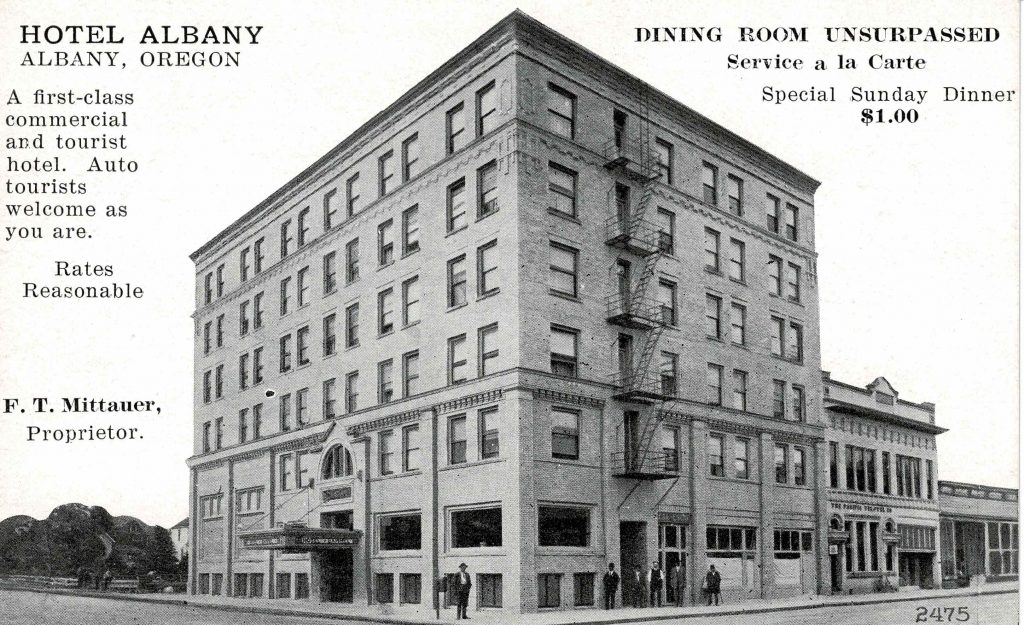 A promotional postcard. F. T. Mittauer owned the hotel from February 1924 until his death on March 19, 1925

A century ago, towns and cities were often characterized by their hotels. In Oregon, Portland had the Portland (for the elite, Queen Anne-style), the Benson (for lumber baron dignity), the Multnomah (for civic pride and boosterism). In Bend, there was Pilot Butte Inn (sportsmens’ HQ); in Salem, the Chemeketa/Willamette/Marion (legislators’ HQ); and there was a stolid sort of place in most towns and cities (the Weinhard, Astoria; the Julian, Corvallis; the Medford, Medford; the Umpqua, Roseburg; the Hotel Oregon, Ashland).

In the 1920s, the rapid growth of paved roads and auto ownership  pushed an agenda of city-boosting hotel development. This led to an array of near-skyscraping hostelries being erected across he state: the Hotel Astoria/John Jacob Astor, Astoria; the Eugene, in Eugene; the Lithia Springs/Marc Antony/Ashland Springs in Ashland; the Baker in Baker City; the Sacajawea, La Grande; the Benton, Corvallis; the Tioga in Coos Bay.

What about Albany? It was initially a river-oriented town, with industries along the bank and the business area parallel to the river. After the first railroad arrived in the 1870s, Albany became a railroad-oriented town, but the depot was a mile from the well-established business district. Eventually, a streetcar connected the depot with downtown, terminating at the St. Charles Hotel and passing several others. The St. Charles dominated the scene until the 1910s, when two new hotels were erected: the St. Francis and the Hotel Hammel.

The 6-story Hammel got a bang-up welcome when it opened in 1913, with a banquet and reception and “talks by notables,” as the Portland Oregonian phrased it. Designed by noted Albany architectCharles Burggraf and built by William Rhodes, the Hammel was named for its chief investor and initial proprietor, J. C. Hammel; his son M. D. Hammel was the first manager. In June 1914, Bert Westbrook took over as proprietor and re-named it the Hotel Albany; Westbrook also managed the new St. Francis Hotel at First and Ferry.

The Hotel Albany closed in the 1970s and was demolished in 1977. The four-story St. Francis hotel building still stands, vacant above its first floor. Recently, a 7-room rustic boutique hotel opened in downtown Albany, which has long lacked any downtown lodgings. It’s a step forward, yet a far cry from the polished Hotels Hammel and St. Francis of a century ago. 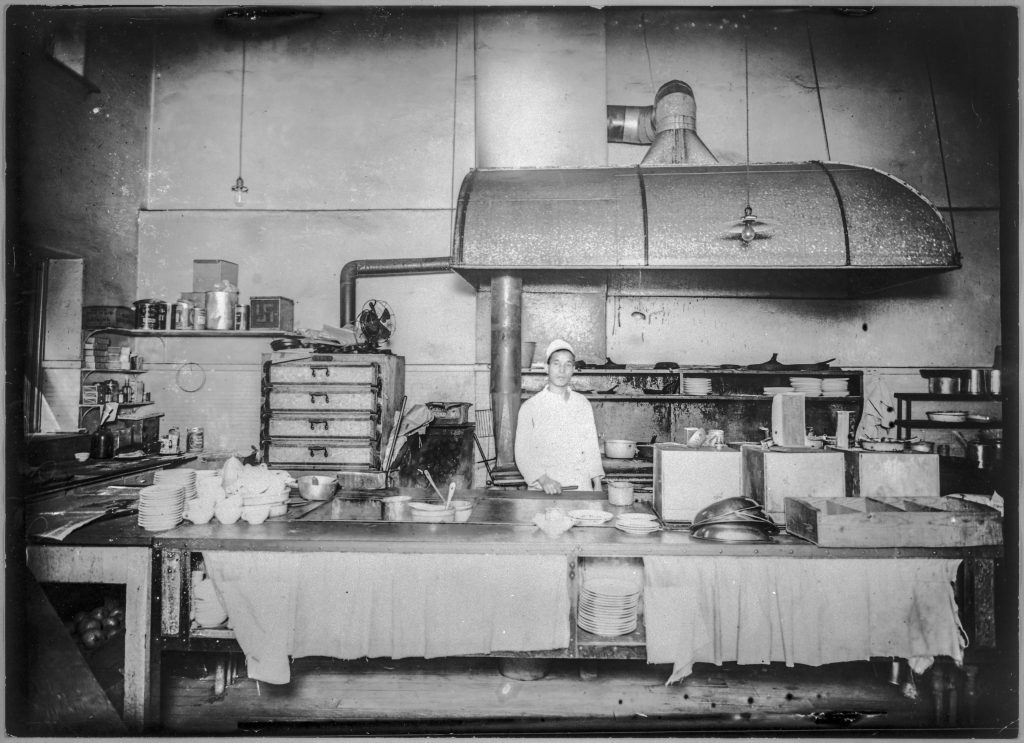 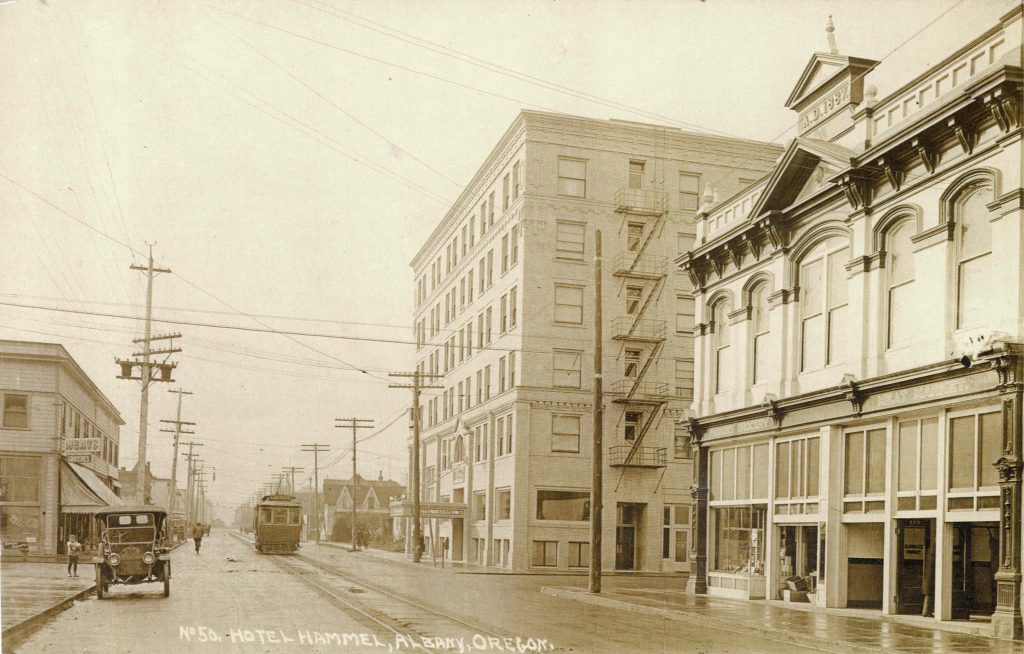 Looking south on Lyon Street. Streetcar service halted in 1918, so this view is ca. 1916