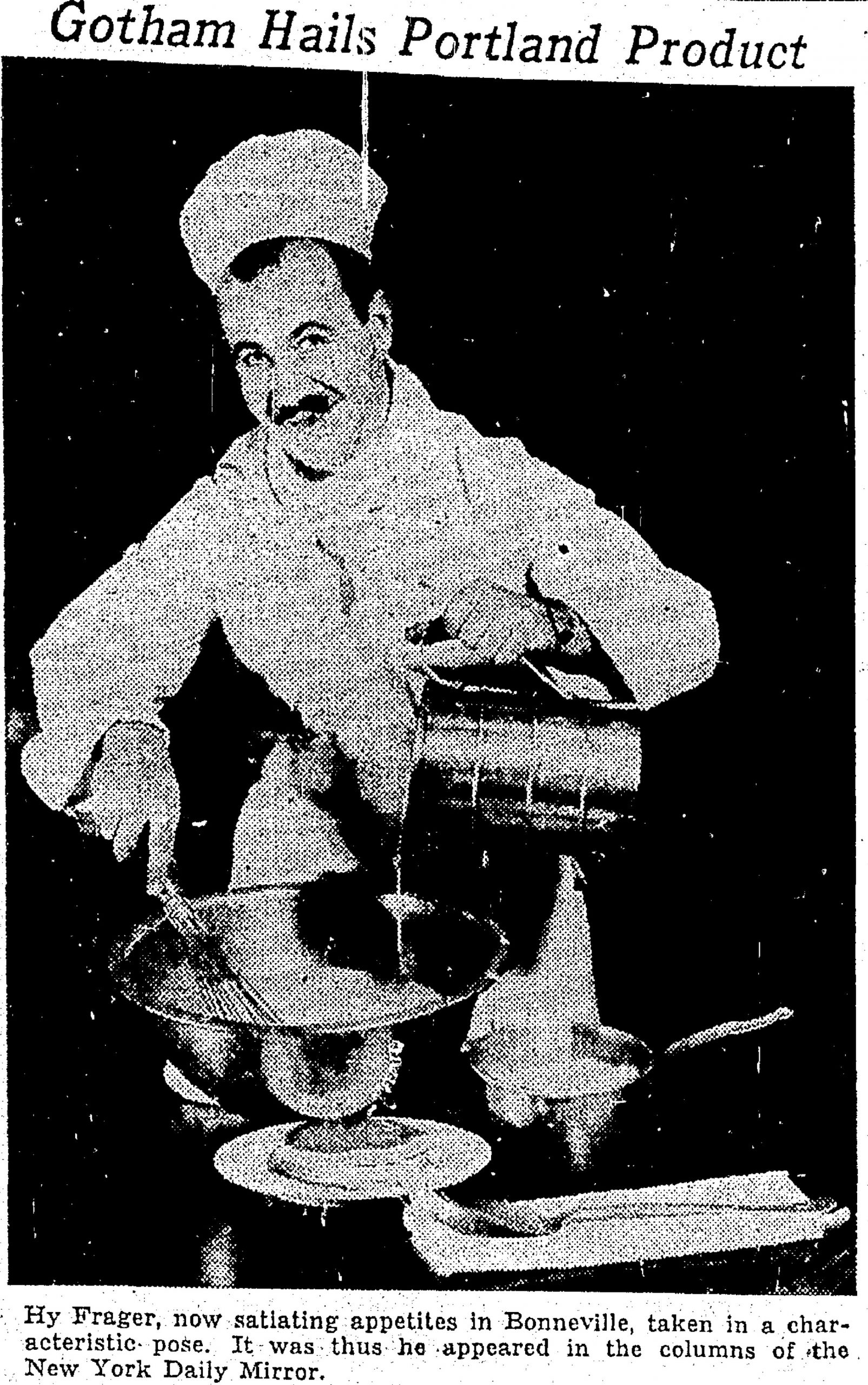 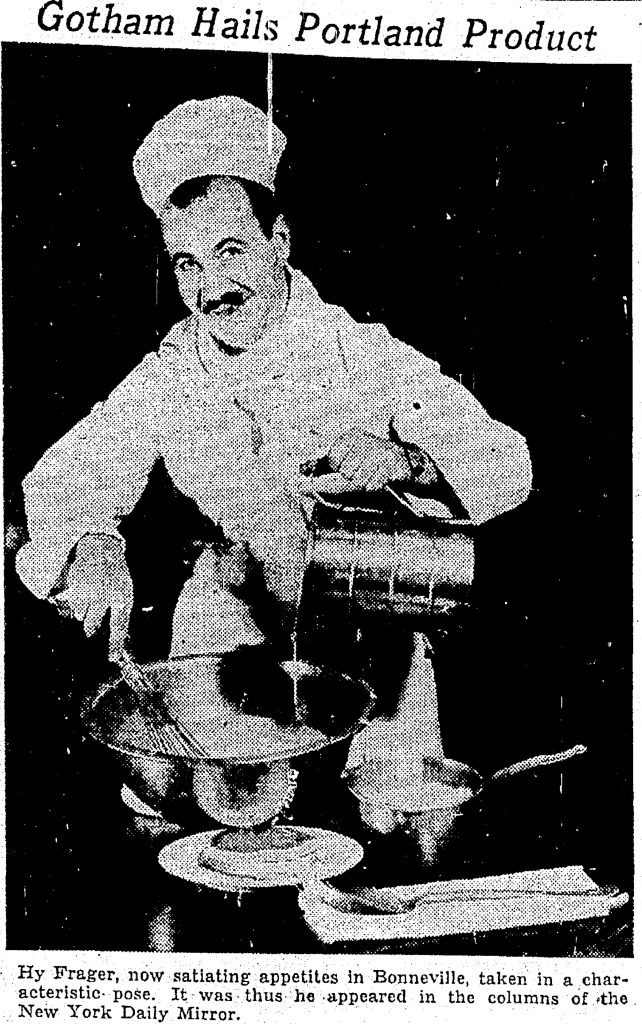 We live in an era of celebrity chefs: colorful characters, often tattooed, who preside over legendary kitchens in food-conscious cities and who concoct startling new recipes involving exotic ingredients and high-tech processes. The men who go BAM! and the women who tout EVOO are household names.

It was not always so. Half a century ago, many of the celebrity names in the culinary world were contrived personae fronting for mega corporations: Betty Crocker (General Mills), Aunt Prudence (Hearst Syndicate) and Aunt Jenny (Lever Brothers for Spry shortening), Aunt Jemima (Quaker Oats for pancake mix and syrup) and Uncle Ben (Mars, Inc., for rice).  There was, of course, Oregon’s favorite food son, James Beard, and there was also the formidable and engaging Julia Child.

But beyond James Beard, local food heroes were few. Portland once had Henry Thiele (1882-1952), a Germanic restauranteur who had been a minor mentor of Beard. And then there was, briefly, a would-be rival to Thiele: Hyman I. Frager, who titled himself “Portland’s own chef” and “Portland’s most extravagant chef.”

Hy Frager was born in Portland in 1906 to Moses and Jennie (Smokoon) Frager, a young Jewish couple who were recent immigrants from Russia. He first comes to notice in the pages of the Portland Oregonian newspaper in 1933 when he offers free steaks to high-scoring participants in a bowling tourney. At the time, he was apparently cooking for a lunch stand affiliated with the Oregon Bowling Alley, located near Broadway and Oak in downtown Portland.

Two years later, Frager is feted as a noted chef for engineers who are working on the construction of Bonneville Dam. The article (Oregonian, September 29, 1935) also touts his recent appearance in the columns of the New York Daily Mirror’s “culinary expert,” Betty Best, which printed Frager’s recipes for cottage cheese pancakes and hamburger rarebit.

In November 1935, Frager began contributing a weekly food-related column to the Oregonian, often starting off with some food history (cheesemaking, rice culture, onions, pasta) followed by several recipes. By early 1936, he is described as the “nationally known chef of The Annex,” next to the Postoffice Pharmacy on NW Broadway, and he is featured at the Oregon Products Exposition’s “Parade of Chefs” cooking school in February. In late summer, Frager announced that he “received two offers to participate in nation-wide campaigns publicizing the menus for which he has become famous.” 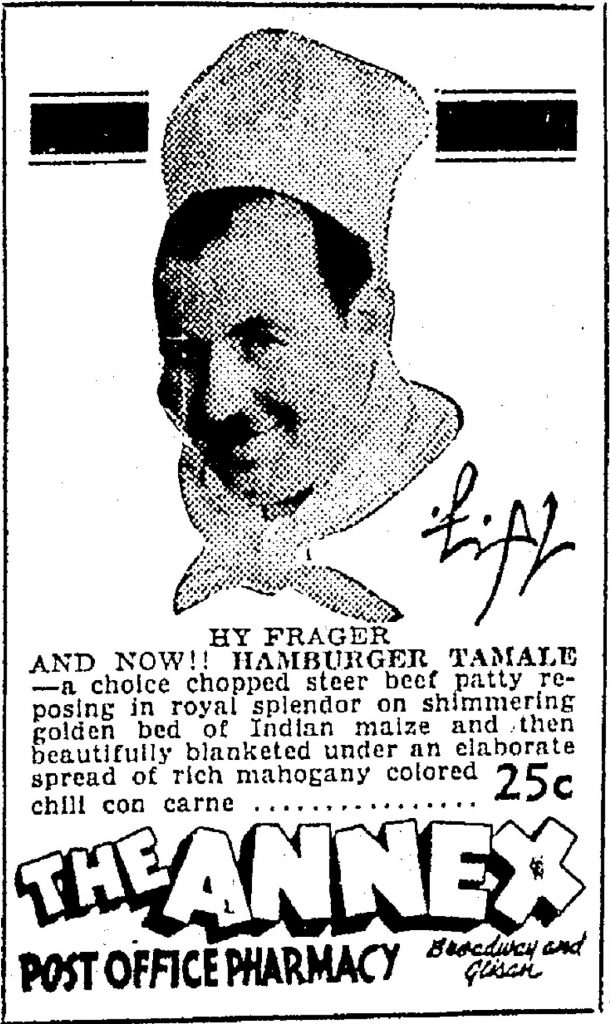 I’ve identified the outcome of one of those offers as his co-authorship (with J. H. Berland and Alice Easton) of “2000 Seasonal Menu Selections,” a booklet published by J. O. Dahl; Dahl issued dozens of food and hospitality management publications from the 1920s through the 1940s. It is a listing of suggested restaurant menu items for various courses, subdivided into seasonal (spring, summer, fall, winter) and regional (East, South, and West) groupings. It is apparent that Frager contributed the West sections, for those include hamburger rarebit, crab louie, planked Columbia sturgeon, fried razor clams, and eggs volcano, all of which Frager writes about or puts on his own menus.

Frager’s columns in the Oregonian end on October 28, 1936. On January 30, 1937, he is reported as having returned from an extensive East Coast trip. “While in New York he was elected to the Gourmet society, composed of internationally famous food connoisseurs, and arranged to write a book for J. O. Dahl, editor of Restaurant Management, to which he has long been a contributor. He attended the National Restaurant association convention in Chicago and spent an entire day going through the extensive Swift plant in that city.”

There is sporadic mention of Frager thereafter. In 1938, he was promoting “pear blossom ice cream” in Medford. The Oregonian of October 15, 1939, says that Frager “who calls himself ‘Portland’s own chef’ and whose ambition is to start a ‘gourmets club’ here, returned to Portland last week after a three-years’ absence to take over the cuisine of the Turf restaurant, 521 Southwest Stark street.” According to the issue of June 21, 1940, “Apple blossom ice cream, made from carefully selected and ripened Oregon apples, is announced by Hy Frager, operator of the Turf restaurant. Mr. Frager’s undertaking marks the first attempt to use apples in the manufacture of ice cream for public consumption.”

In between those two articles is an ominous announcement on March 2, 1940, under the heading bankruptcy petitions: Hyman I. Frager, cook, 1951 Southwest Second Avenue,–liabilities $11,878, assets $248.

The story ends soon after. Hyman I. Frager died on May 8, 1941, at the age of 34, at St. Vincent’s hospital “following a three months’ illness with a liver ailment.” A promising career was suddenly cut very short.

Hamburger Rarebit
4 round rolls or buns
4 thin hamburger patties, cooked quickly
4 cups white sauce
¾ pound sharp Cheddar cheese
3 teaspoons dry mustard
2 teaspoons Worcestershire sauce
Toast and butter bottom half of rolls and place hamburger pattie on each. Toast and cut in two top half of each roll and place on pattie. Melt cheese in the white sauce, add mustard and the Worcestershire sauce and pour steaming hot over the roll and hamburger. Garnish with tomato quarters and sweet pickles and serve at once. 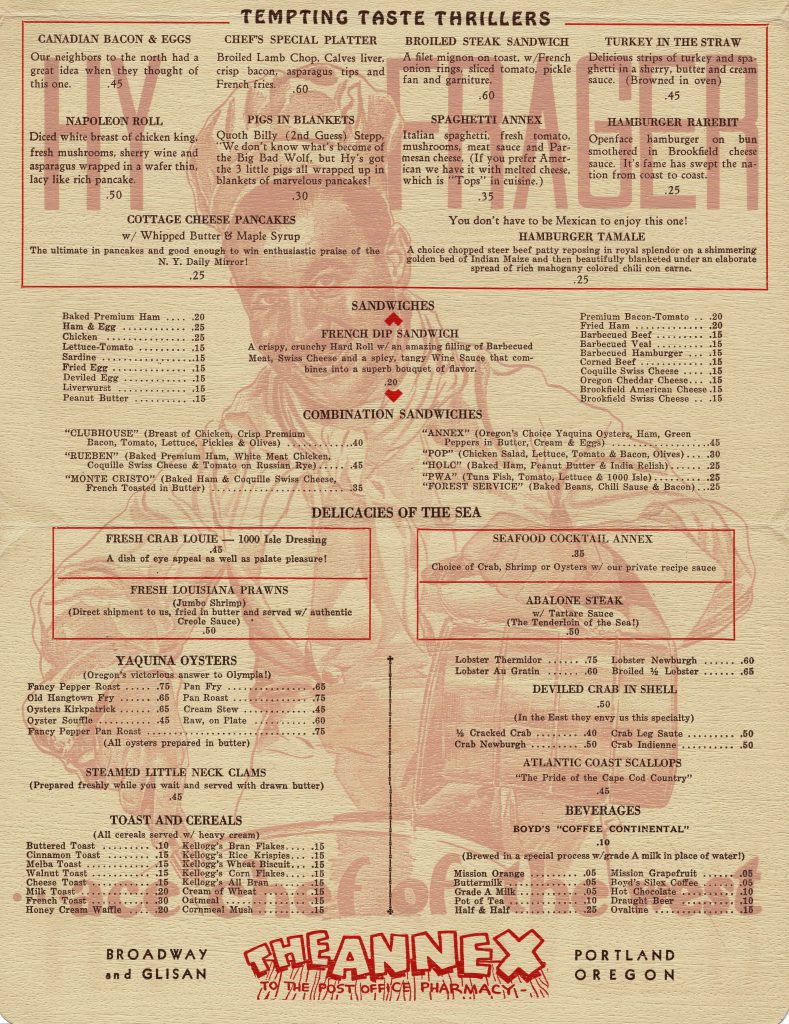 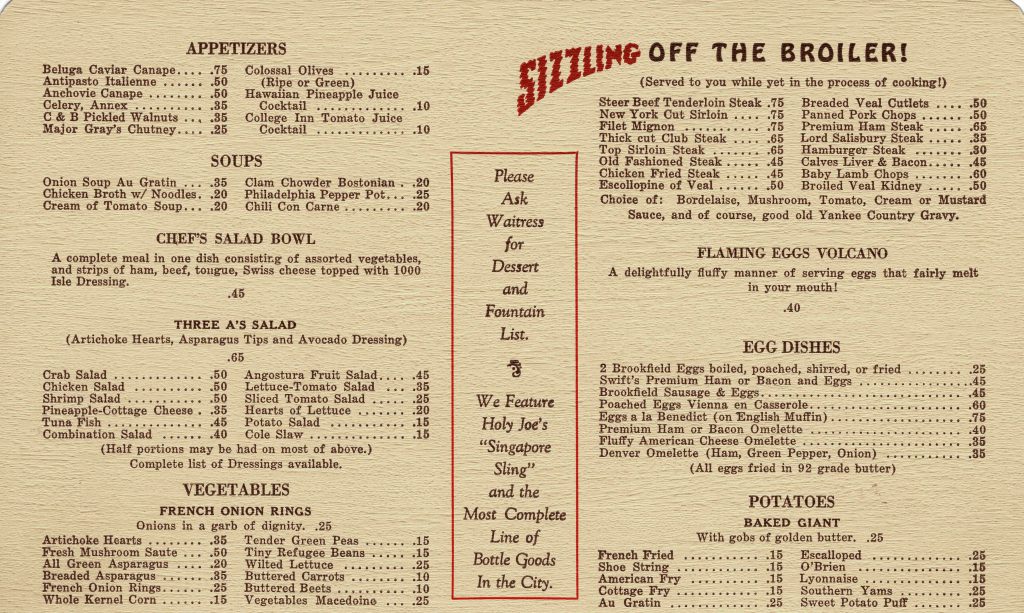