Father’s: the Guru, the Treasure, the Best Food in Oregon

Father’s: the Guru, the Treasure, the Best Food in Oregon 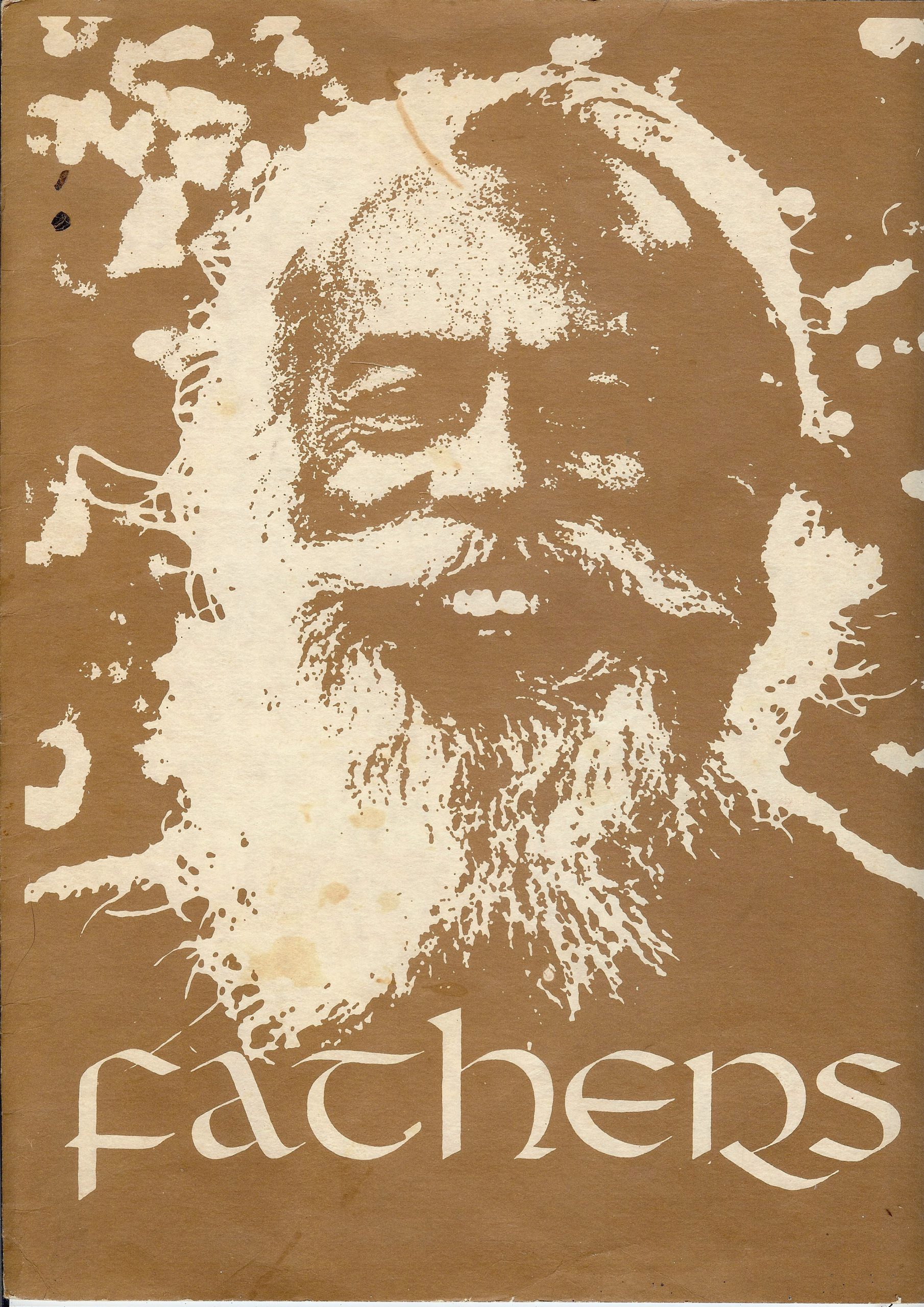 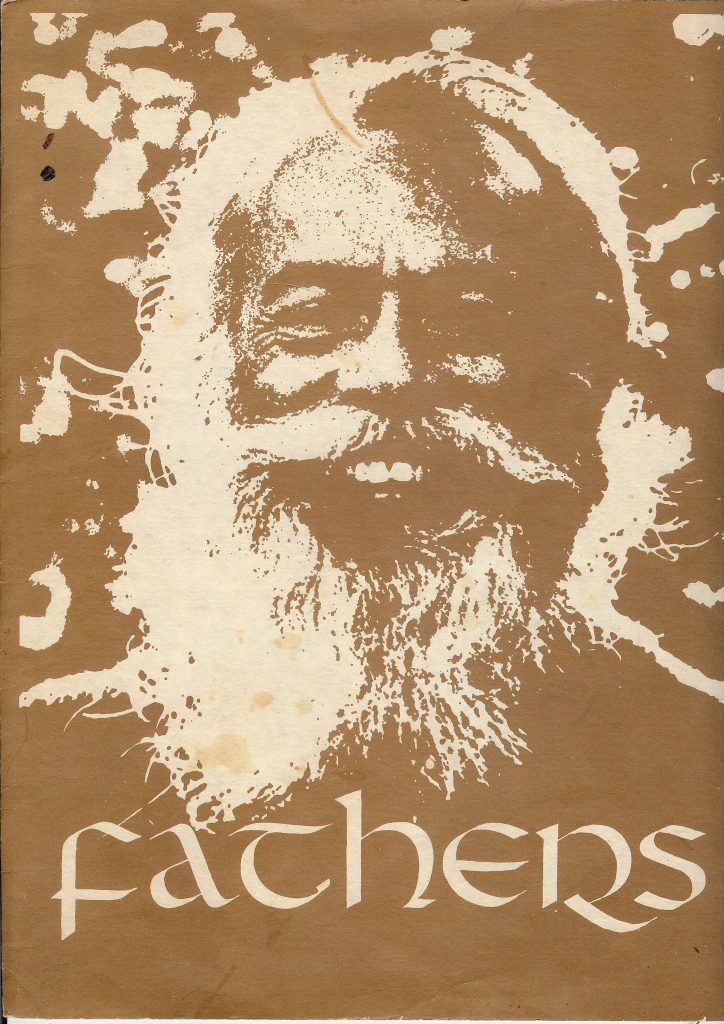 Father Ciranjavi on the menu cover, 1974

The Rajneeshee were not the only followers of an Indian guru who opened a restaurant in Oregon.

Our other culinary guru was Ciranjavi Roy, who inspired Nelson and April Souza to create a novel upscale restaurant in the sleepy and rather remote seaside resort town of Manzanita, Oregon (1970 population: 261). Opened on June 17, 1974 and named Father’s for the guru, the restaurant was built to impress, using the talents of local artists and artisans. It boasted hand-crafted exterior shingling, stained glass windows, arty light fixtures, and a carved front door; chairs, tables, and pottery were likewise local handiwork. The menu was ambitious, impressive, and expensive.

The Souzas had traveled the globe in the early 1970s in search of spiritual enlightenment, and they had found it in the Indian Himalayas: the message they heard was, “Come to San Francisco.” There, on December 11, 1972, they met Father Ciranjavi at the Sunday meeting of the Foundation of Revelation.

The Souzas, with their young daughter Nanda, soon went to Oregon to spread the word of Ciranjavi. In September of 1973, Ciranjavi came to meet the Souzas in Manzanita “where he revealed that soon he would create a restaurant.” The young couple made that revelation come true by the following spring.

And they received some notice for their efforts, although I have had a difficult time tracking it down. Shortly after Father’s opened, a detailed article appeared in the North Coast Times-Eagle of nearby Wheeler (1970 population: 262). “Quite a few of our customers have already told us that this is the best food they have ever eaten in the whole state of Oregon,” said Nelson Souza, who went on to give full credit for the food to his chef, Richard Hubic, who came from San Francisco. 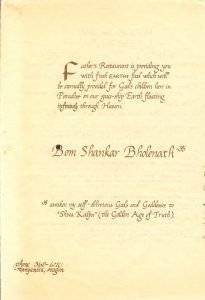 An undated newspaper clipping from the Portland Oregon Journal tells of a visit to their editorial offices by two young couples from Manzanita, the Souzas and their friends Jeff and Juliana Stevens. The item, written in a tone of mild digs and jibes, described some rocks the young people brought with them, rocks with inscriptions which, they said, had been “translated” by “a San Francisco guru-type they call ‘Father’ or ‘Ciranjavi.’” These inscribed rocks were said to be connected to the fabled lost treasure of Neahkahnie Mountain. That fable is another story; a good wrap-up on it (lacking, however, any reference to the Souzas, the Stevens, or Ciranjavi) can be found in the Oregon Historical Quarterly (Summer 2018, 139:2, pp. 282-313): “The Mountain of a Thousand Holes: Shipwreck Traditions and Treasure Hunting on Oregon’s North Coast.” The news people were apparently a bit bewildered by their encounter; they mentioned the restaurant very briefly, and they were snidely dismissive of the Souzas and the Stevens.

Another clipping is from Doug Baker’s column in the Oregon Journal for October 15, 1975. Baker was a boulevardier or man-about-town who often discoursed on food and restaurants. He wrote that “’Father’s Restaurant’ in Manzanita apparently was a far better restaurant than many of us realized. Now it’s closed and April and Nelson Souza, the mystical couple who operated it, say they’ll reopen it in the Bay Area. Souza telephoned the other day to express his bitterness over the poor reception the restaurant received from Oregon residents. He’s particularly unhappy because the ‘Brand X’ newspaper [the Oregonian] chose not to publish the James Beard column of Sept. 11 in which the jolly gastronome celebrated Father’s as ‘the best restaurant between Vancouver, B.C., and the California border.” Beard praised their salmon, a fish soup, an eggplant dish, the strawberry tart. And the espresso: yes, Father’s had an espresso machine, long before the coffee craze that still marches on today.

Father’s restaurant did not last long. I have not been able to locate a copy of James Beard’s column of 9/11/1975. I have found no biographical information on Nelson or April or Nanda Souza, nor on the Stevens family, nor on the highly-praised chef, Richard Hubic.

And what about Father? Ciranjavi, or Chiranjavi, or Ciranjavi Roy, or Father, was born in India in 1913, and came to San Francisco in 1969. There he was involved in the establishment of the Foundation of Revelation, a spiritual gathering that still, in some wavering form, exists. You can see a video of Father pontificating on their website. He died in 1981.

From The 60s Communes: Hippies and Beyond, by Timothy Miller (Syracuse University Press, 1999):  “His Shivite practice embraced the use of marijuana and any other consciousness-affecting substance—Gottlieb wrote that ‘he was offered every kind of mind bender in the world, and I never saw him turn anything down’—and that of course endeared him to the psychedelic pilgrims of Morning Star [Ranch].” “As Don McCoy recalled, ‘Father said, “I didn’t come to America to eat brown rice and take off clothes. I want steak! I want steak!”‘” “…Ciranjavi was venerated by his followers as a profound spiritual teacher. Those less captivated by his message had a decidedly different opinion of him: he was mainly interested in endless sex and drugs, and it all became tiresome.”

From Droppers: America’s First Hippie Commune, Drop City, by Mark Matthews (University of Oklahoma Press, 2011): “The [Morning Star Ranch] community especially embraced Ciranjavi’s Shivite use of consciousness-affecting substances. However, the marijuana and hashish aficionados of Morning Star lost interest in Ciranjavi after he got drunk for the first time and endorsed gut-rot American wine over hashish. He especially praised wine’s cheapness and legality.”

From Sleeping Where I Fall: A Chronicle, by Peter Coyote (Counterpoint Publications, 1998): “… Ciranjavi, an eccentric, silver-haired, dope-smoking, coke snorting Indian holy man who insisted that he and his followers were immortal. Lou Gottlieb, founder of Morningstar Ranch, a famous local commune belong[ing] to a parallel tribe to the Diggers, had met Ciranjavi in India, been impressed, and brought him home. Chanting ‘Bom Shankar Bolenath’ at the top of his lungs, Ciranjavi would inhale huge draughts from a chillim, a small clay pipe for smoking marijuana and hashish, and then, wreathed in smoke, would begin lectures saturated with impenetrably baroque Hindu imagery.”

Information for this entry was found in the Nehalem Valley Historical Society’s online archives at http://nehalemvalleyhistory.org/omeka/items/show/354. Some was also tucked within a menu now in the writer’s collection. 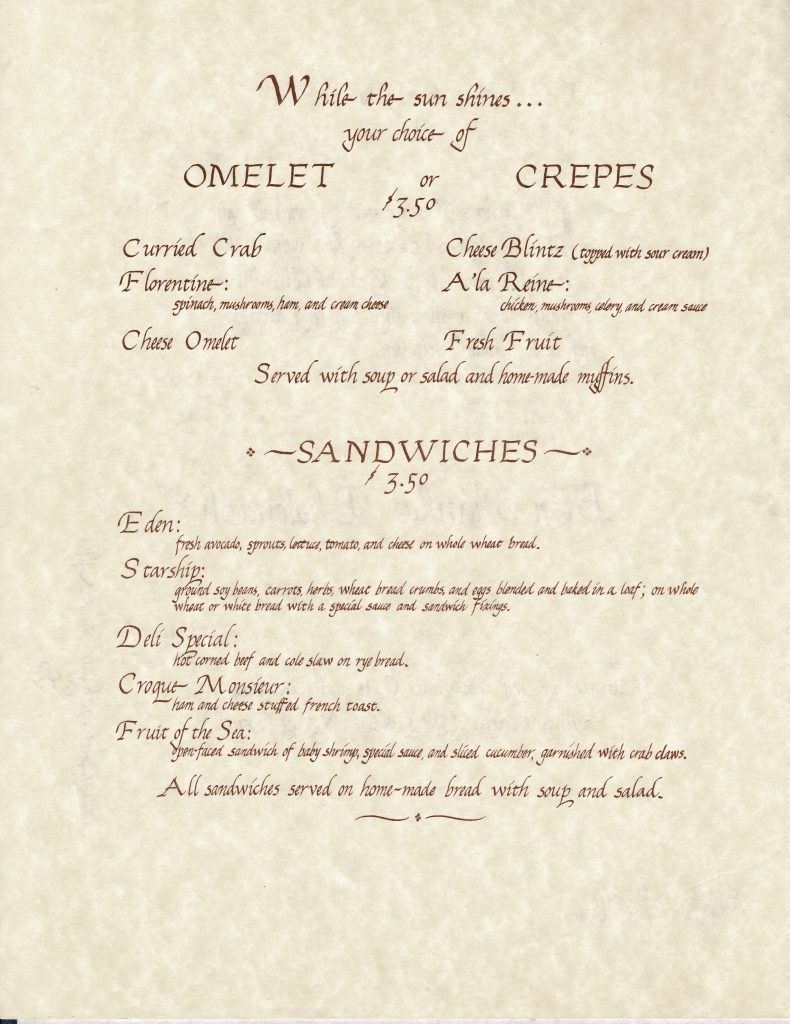 Father’s, unlike Zorba the Buddha, was not a vegetarian restaurant 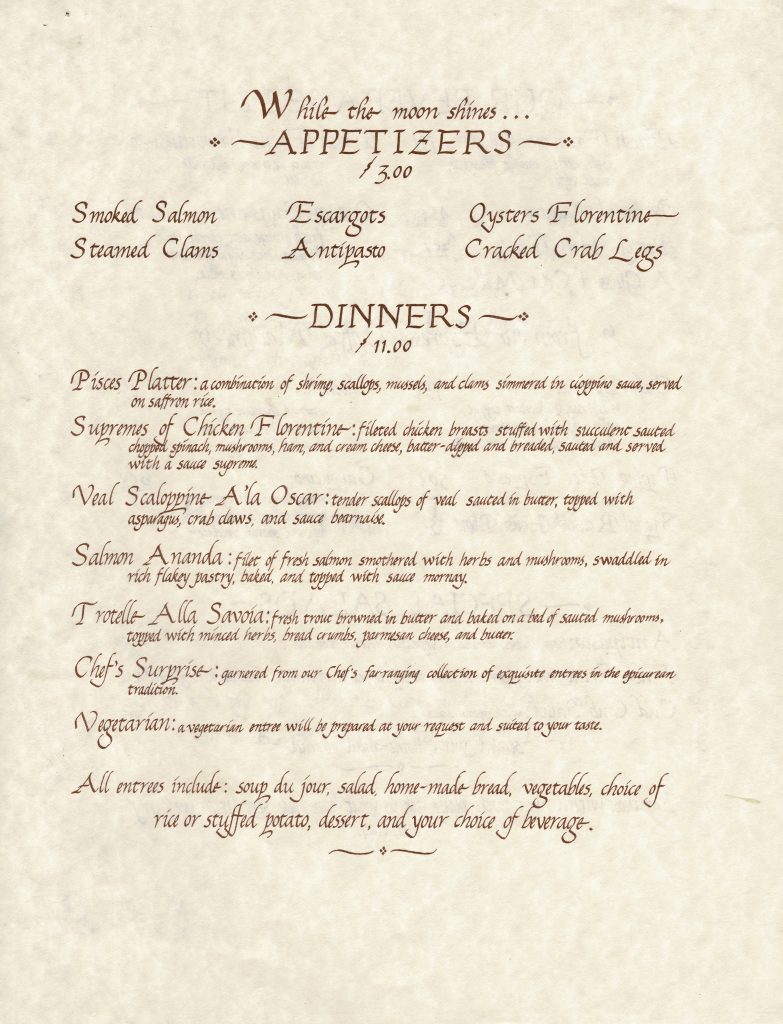 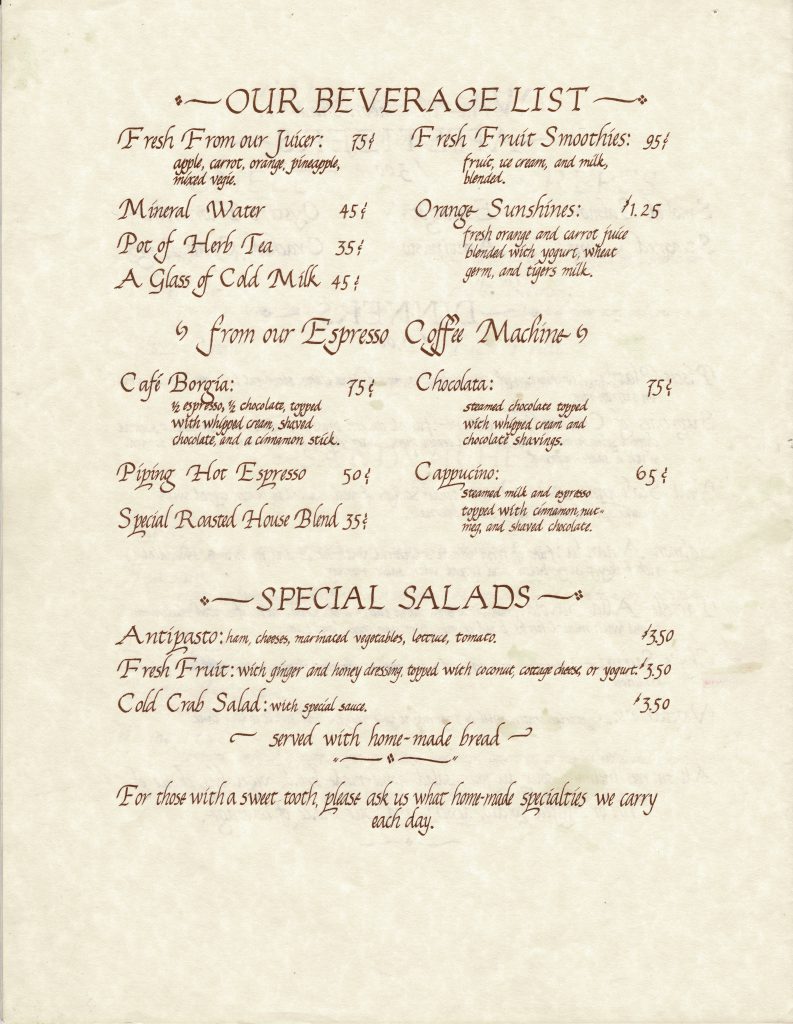 Nelson Souza said that his coffee was brewed with beans from four continents. He did not name them.