Sunset to the Davis Mountains

Sunset to the Davis Mountains 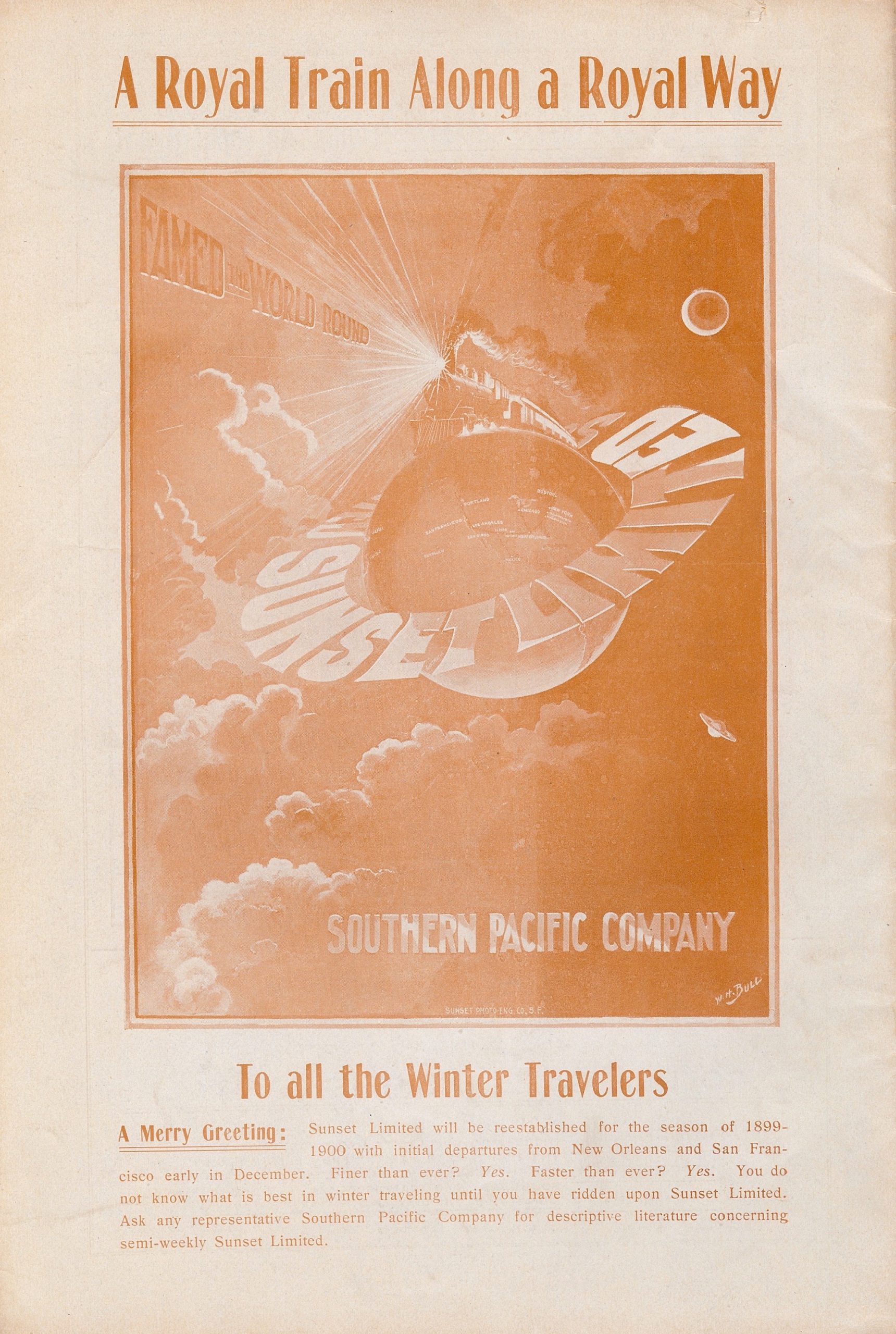 For several years we have contemplated a trip to the remote town of Fort Davis, Texas, enticed by the presence of friends who have convincingly extolled the natural and historical sights to be found there.
In my historico-romantic mind’s eye, we would go there by train, stepping down at Alpine, the nearest railroad station to Fort Davis, along what was once the main line of the Southern Pacific Company between California and New Orleans. During the first half of the twentieth century, this line was advertised as the “Sunset Route,” and its premier passenger train was the Sunset Limited.

The sunset motif gave rise as well to the Southern Pacific Company’s magazine for public consumption: the first issue of Sunset came out in 1898. Although the company sold it in 1914, it remained a key advertiser into the 1960s.

At its inception in the winter season of 1894 (back then, California was notably a winter resort), the Sunset Limited was a fancy-pants train that carried only first-class, Pullman sleeping car passengers on a once-a-week, winter-time schedule to San Francisco. By 1913, it operated every day, year-round; in 1950, it emerged as a snappy new streamlined train from Los Angeles to New Orleans, with both coaches and sleeping cars, a dining car decorated with Audubon prints (well, they were reproductions, of course), and a leathery lounge called “The Pride of Texas,” emblazoned with cattle brands.

The Southern Pacific tried to kill the Sunset in the late 1960s: it ran 3 times a week, lost its sleeping cars, had its lounge removed, and its dining car was replaced by snack vending machines. When Amtrak came along in 1971, it sort of rescued the train, but it is one of but two Amtrak trains today that still operate only thrice weekly.

It would be keen to step off the Sunset at Alpine, and to have a battered 1952 Ford station wagon waiting chauffeur us to Fort Davis. We are going there, but I’m afraid we’ll drive our own Prius. Sigh.

A side note: the Sunset’s menu in 1964 was still rather ambitious, offering five table d’hote dinners that started off with sweet gherkins and rosebud radishes and ended with a dessert course of a strawberry sundae, domestic cheese with crackers, or diplomat pudding with brandy sauce. The “automatic buffet car” of the late 1960s proffered “assorted hot canned foods” such as beef stew, and “hot tray meals”–“example: salisbury steak with gravy, potatoes and vegetable.” “Dessert suggestions” were pie, fruit jello, candy, and “frozen bars.” Umf.