Coalca’s Pillar and Other Geological Oddments

Coalca’s Pillar and Other Geological Oddments 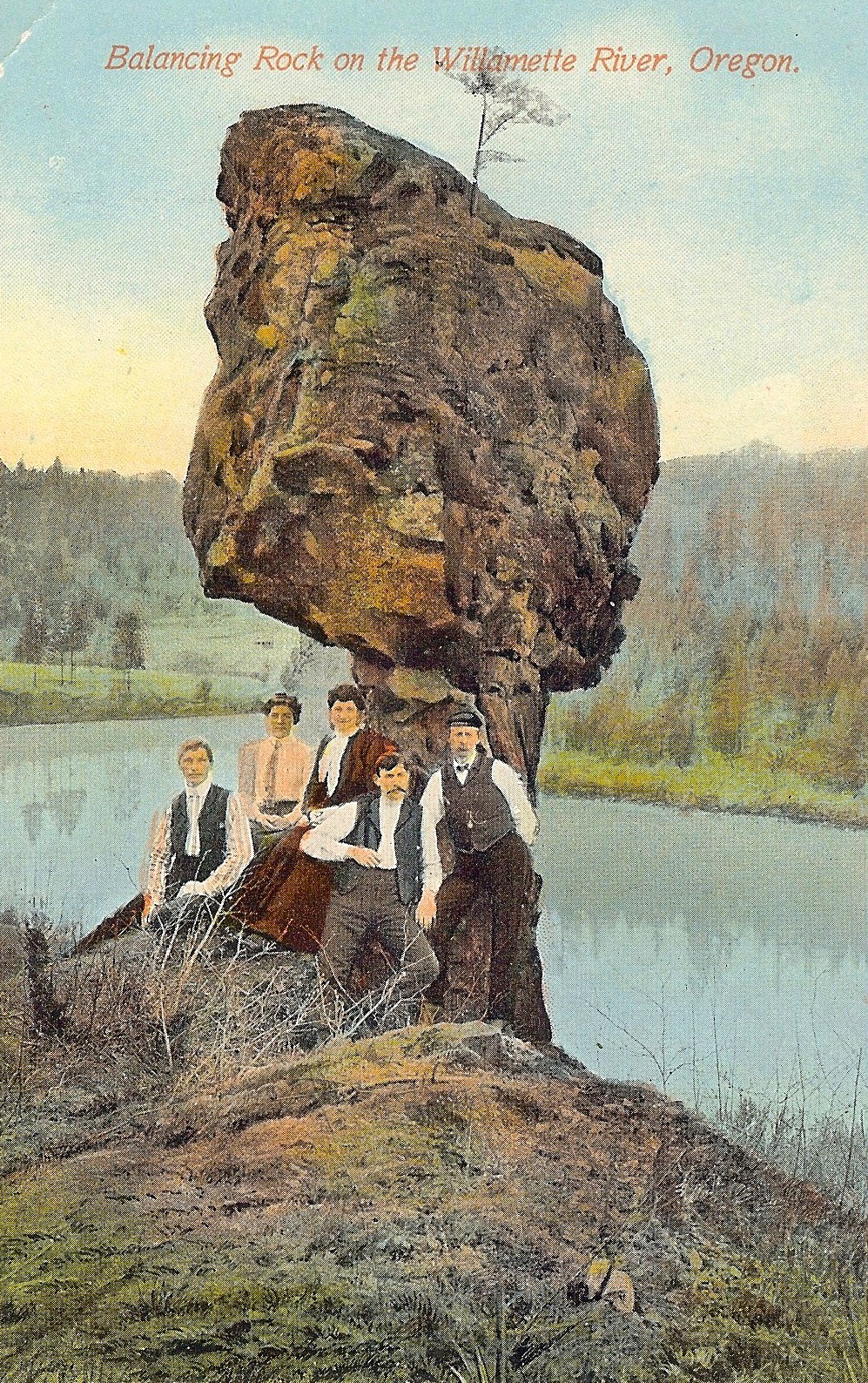 We don’t seem to take much delight or interest any more in geological oddments. There was a time when they had a strong appeal: our earliest national parks usually centered on geological marvels: the geysers of Yellowstone, the sheer face of El Capitan in Yosemite, the deep blue pool of Crater Lake.

Lesser creations too had their partisans. One of those was the basalt oddity called Coalca Pillar, or Coalca’s Pillar, about three miles south of Oregon City. As a child, when we drove along Highway 99E toward grandma’s house, I always watched for this “balancing rock,” perched on a bluff overlooking the Willamette River. (It is not, of course, a balancing rock, but an eroded basalt plug.) Over the years, trees and shrubs have grown up to gradually hide it from easy view, but if you look sharply upward just south of the chainsaw art shop, you can still get a glimpse of it.

Photographer Benjamin Gifford took a marvellous shot of the pillar about 1910, which is reproduced in Oregon, Then & Now (Westcliffe, c2000) alongside a contemporary image by Steve Terrill; Terrill too had childhood memories of traveling 99E and watching for the pillar. Photography historian and collector Tom Robinson has told me of the mad scramble he made several years ago to reach the pillar (Tom also contributed the biography of Gifford to Oregon, Then & Now), and Steve notes in the book that getting to the rock entailed fighting through both poison oak and stinging nettles.

And of course a century ago, you could see it easily from the Southern Pacific passenger trains, just opposite the railroad station sign that read, COALCA, 751 miles north of San Francisco. The Southern Pacific’s widely-read magazine, Sunset, published a short piece about Coalca’s Pillar in its issue of March 1900. It says nothing about the geological formation itself, but instead relates a tale of romance and war revolving about a Chief Coalca of the Molalla Indians and his desire for Nawalla, the daughter of Chief Chelko of the Clackamas Indians. I have been unable to locate any information about the genesis of this legend, and no other references to Coalca or Nawalla or Chelko. If you know anything of them, please do get in touch with me!

And there were, and are, many other geological oddments that once attracted at least as much notice as Coalca’s Pillar. Consider only basalt, and consider only the Columbia River: there is Rooster [Cock] Rock, the Pillars of Hercules (also known as The Needles; still standing beside I-5 but little known), massive Beacon Rock (almost turned to rubble for building jetties), lofty Coffin Rock (near Longview; a sepulchre that was demolished to build jetties), and Pillar Rock (near Altoona, Washington; now somewhat smashed up for a navigation light). Why have they faded from our view?

For more on Coalca, and the original article from Sunset Magazine, see the blog entry for Coalca Redux.