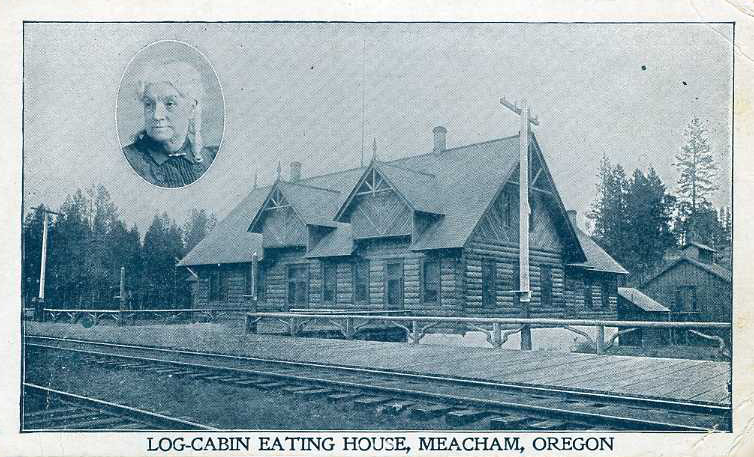 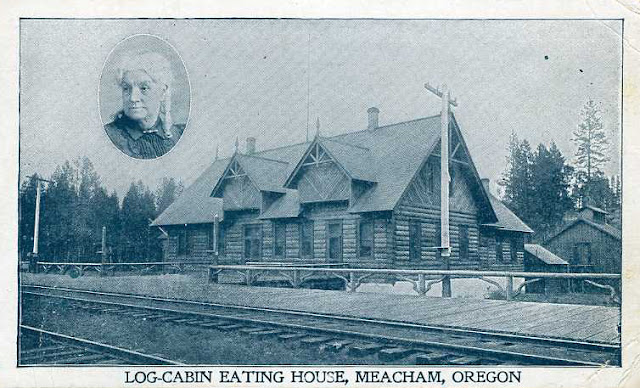 “At Meacham, in the midst of the Blue mountains is nestled an attraction that appeals to every traveler. It is a unique mountain station, known the land over for its excellent meals and home-like conditions. It is a large elegantly built log structure and is presided over by a dear old lady known as ‘Grandma Munra.’” —Salem Daily Capital Journal, September 10, 1896

“Grandma Munra” was Katherine Sara Sterrett, who was born in Erie City, Pennsylvania, in 1830. She married John R. McCarter in 1850, and over the next three decades she ran boarding houses in Pennsylvania and in southern California. At some point she re-married, to Knight S. Munra, and the couple came to Oregon where she did catering and operated dining rooms at the St. Charles and another hotel in Eugene in the 1880s.
About 1886, Henry S. Rowe, general superintendent of the Oregon Railroad & Navigation Company, brought Katherine and her husband to Bonneville, Oregon, to run the company’s new eating house. The Bonneville dining room, less than forty miles east of Portland, served mostly railroad workers when it opened, but its popular proprietor soon made it known throughout the Columbia River Gorge.
In the early 1890s Mrs. Munra operated a hotel in Junction City and was then in charge of the boarding halls at the University of Oregon in Eugene. Her fame grew again when the Union Pacific Railroad put her in charge of a new dining station called the Log Cabin about 1894. This rustic structure was located in the remote and chilly Blue Mountain town of Meacham (elevation 3,670 feet; record low temperature, -52 degrees), where Grandma Munra served railroad passengers as well as railroad workers, offering a “wonderful bill of fare of home-made bread, preserves and pastry” accompanied by “dainty linen and gleaming silver.”
The Meacham eating house continued even after the introduction of a dining car on the railroad’s premier passenger trains. Katherine Munra’s name was legend along the Union Pacific rails; “Every summer the company gave me a vacation. They furnished me an annual pass and treated me perfectly lovely.” But the Log Cabin burned to the ground in November of 1902 and was not replaced; dining cars were becoming standard railroad equipment. Grandma Munra returned to the Gorge, where in 1903 she took charge of the dining room of the new Hood River Country Club Inn. Despite her age, Mrs. Munra was managing the tea room of the Portland YWCA in 1904.
Perhaps more hostess and mother figure than cook, Mrs. Munra was nevertheless particularly noted for her pies and cakes. In an article in the Portland Oregon Journal in 1911, she provided the recipe for a cake that she attributed to Martha Washington; in a 1923 interview with Fred Lockley of the Journal, she says, “Some day when I have time I will give some of my recipes for cakes. My friends tell me they like my cakes pretty well.”

Munra Point and Munra Falls in the Columbia River Gorge were named for Grandma Munra in 1915. Katherine Sara Sterrett Munra died in Portland June 29, 1923, and is buried in Lone Fir Cemetery.


Martha Washington’s Cake
Grandma Munra said she obtained this recipe in St. Louis in 1869 from a Mrs. Stephen Gardener, who got it from her mother, who was a neighbor of the Washingtons at Mount Vernon and who had “been instructed in the making of the cake by Martha Washington herself.”
Take 1 and ¼ pounds of white sugar, 1 and ⅛ pounds of butter, 2 pounds of flour and 1 pint of sour milk, 6 eggs, a teaspoon of soda in the sour milk, the grated rind of 2 lemons and the juice of one, one nutmeg, a pinch of mace, 1 pound of stoned raisins, 1 pound of currants and 1 and ½ pounds of citron.
Whip the butter and sugar to a cream. To which add the yolks of the eggs well beaten, then stir in the milk and the flour alternately, followed by the whites of the eggs beaten to a froth. Have the fruit well floured and stir in last. Cover with a buttered paper to keep from browning too rapidly and bake for 2 and ½ hours.
Passengers on the train between Portland and the Cascade Mountains are often interested in the sight of a sweet-faced old lady with soft white hair and bright brown eyes, to whom every official on the road pays court, from the boy who sells “apples ‘n bananas” to the superintendent. And the inquiring tourist is always given the ready information, “Why, that’s Grandma Munra, who used to have the place at Meacham, she’s about the most popular woman in Oregon, I guess.”