It’s a long-standing exercise to characterize American cities. We debate today just how “weird” is the city of Portland (of course, it’s about as weird as Akron or Omaha or Pensacola, which is to say it’s not). It might be better if we looked for what is distinctive about Portland (Akron, Omaha, Pensacola). A century ago, Edward Hungerford wrote The Personality of American Cities (New York: McBride, Nast & Co., 1913), which includes a vignette of Portland as “New England transplanted”; here is “a town [sic] that is so absolutely American, that it seems as if she might even boast one of the innumerable George Washington headquarters somewhere on her older streets.” Those streets “are conservatively narrow, her staunch Post Office [Pioneer Court House] suggests a public building in one of the older cities on the Atlantic coast, and her shops are a medley of delights, with apparently about thirty percent of them given over to the retail vending of chocolate. Our Portland guide was grieved when we made mention of this last fact. ‘I once went to Boston,’ said he, ‘and found it an almost continuous piano store.'”

But this is not an essay on The Hazelwood and its sweets, but rather to the point that Portland does not have, nor has it ever had, a reputation for cosmopolitanism. Yes, it has had its share of immigrants and sojourners, travelers and traders; but that New Englandish pall seems to have kept the manifestations of cosmopolitanism to a minimum.

Still, sometimes, in some ways, the city has grasped for the exotic and the worldly. Consider the early 1960s, in the flush aftermath of Oregon’s statehood centennial of 1959. That celebration brought foreign exhibitors to Portland! (I still vividly remember an exhibit that included the chance to smell attar of roses from Bulgaria, behind the forbidding Iron Curtain.)

In December 1962, the Cosmopolitan Motor Hotel opened at the corner of NE Grand Avenue and Holladay Street, plonked sort of halfway between the new Lloyd Center shopping mall and the new Veterans Memorial Coliseum. Though only a modest five floors in height, it boasted a rooftop dining room touted as “Top of the Cosmo,” headed by a Swiss-born chef, Ernest Herzog. Herzog had experience in Puerto Rico and at the Portland Sheraton (another new hotel, located at Lloyd Center) before coming to the Cosmo, where his menus featured “Oregon grown fresh chicken” in 1963.

By 1964, Herzog and the Cosmo were advertising a menu that went “Around the World in Seven Days.” While the Top of the Cosmo may not have made much of a difference in advancing Portland’s cosmopolitan credentials, over time Herzog did make an impact. He was one of the first members of the Chefs de Cuisine Society of Oregon, and he went on to head his own restaurant, the Swiss-themed Matterhorn in the early 1970s. The Cosmopolitan Motor Hotel is today the Red Lion Convention Center, and the Top of the Cosmo is called Windows Skyroom and Lounge. It appears that what goes on there today is almost entirely pre-sports-event drinking–no longer is it a place to go for some adventuresome, cosmopolitan dining. Fortunately, now there are many other options for culinary explorations. 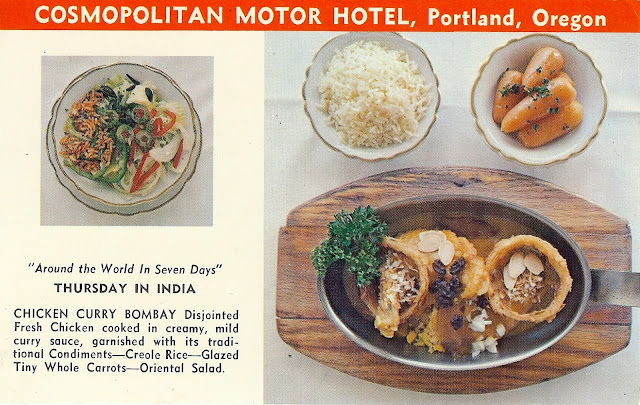